Summary In the early 21st century nearly half of the world population speaks a mother tongue which belongs to the Indo-European language family. The languages belonging to this language family likely originated around 4000 BCE among nomadic horsemen in the Pontic-Caspian steppe, they subsequently spread to Europe, to India and to Iran in several waves of migrations. Around 1500 BEC Indo-European peoples entered India, starting the Vedic period, and around 800 BEC the Indo-European Medes, Parthians and Persians entered Iran. 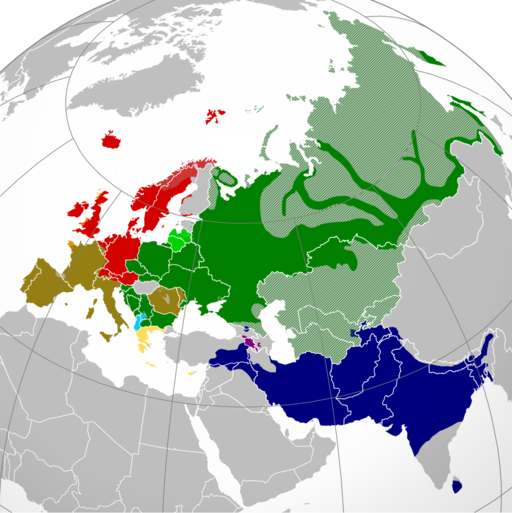 Today’s similarities among the various languages between England and Bengal are rooted in early human migrations which likely started from the Pontic-Caspian steppe north of the Caucasus around 4000 BCE. The people which spoke the Proto-Indo-European language were originally nomads living in that area which today belongs to southern Russia and Ukraine. The horse was likely domesticated by them around that time, and it was useful in war and helped them to efficiently bridge vast distances in Eurasia.

The Indo-Iranian peoples, a sub-group of the Indo-Europeans, appeared in central Asia around 2000 BCE. They split into the so-called Indo-Aryan and the Iranian peoples. The Indo-Iranians migrated into the civilized regions with agriculture and states in two waves, with the Indo-Aryans first migrating to the Indus Valley (in the Vedic period) and to the Fertile Crescent (founding the Mitanni kingdom) around 1500 BCE, and the Iranians – among them Medes, Parthians and Persians – migrating from Central Asia to the western Iranian plateau around 800 BCE. The Indo-Aryan migration to the Indus Valley, and from about 1200 BCE on to the east into the Ganges Plain and to the south into central India, was a particular important event in the history of India, as the Indian caste system originates from that time when Indo-Aryans suppressed the local populace and put themselves at the top of society. The four classes in the caste system which survive until today, from the top to the bottom, are the Brahmins (priests), the Kshatriyas (warriors), the Vaishyas (peasants and merchants) and the Shudras (servants).

An Egyptian painting of the Hyksos riding on horses and using chariots around 1600 BCE. The Hyksos, who were partially Indo-European, invaded Egypt and introduced the horse to Egypt in that time. (© Unknown / Wikimedia Commons / Public Domain)

In the west Indo-Europeans spread to Europe since the 4th millennium BCE. There were various migrations to the Fertile Crescent in the 2nd millennium BCE. The Hyksos, an at least partial Indo-European people, invaded Egypt in 1650 and ruled it for a century. Among other techniques, they introduced the horse and the chariot to Egypt. The Sea Peoples, who invaded the New Kingdom of Egypt, the Hittite Empire in Anatolia and other states around 1200 BCE during the Bronze Age Collapse, were a vast mix of peoples who at least partially were Indo-Europeans. Other Indo-European peoples coming into that area at that time were the Greeks, the Phrygians and the Philistines.