Summary 2.4 billion years ago the Earth’s atmosphere got enriched by oxygen, as some microorganisms developed photosynthesis as their energy source which produced oxygen as a byproduct. This led to a mass extinction of life forms for which oxygen was poisonous, and to a cooling and global glaciation of Earth which lasted about 300 million years. Atmospheric oxygen could be used for new life forms as an energy source since about 2 billion years ago, and it led to the formation of an ozone layer which shielded the Earth’s surface from 98% of life-threating solar ultraviolet light ever since. 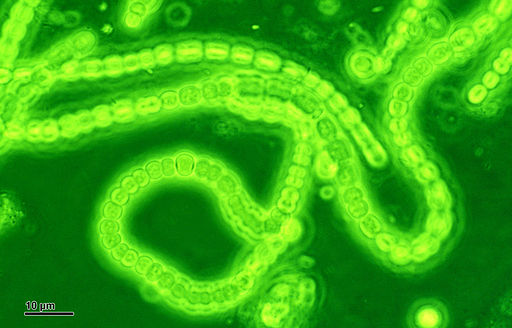 Photosynthesizing cyanobacteria were responsible for the oxygenation of Earth’s atmosphere 2.4 billion years ago, which led to a severe cooling of the Earth’s climate and to a mass extinction of anaerobic organisms. (© Josef Reischig / Wikimedia Commons / CC-BY-SA-3.0)

Photosynthesis is a method of living cells to extract energy from sunlight – contrary to chemosynthesis which provides energy from molecules – and was developed around 3.5 billion years ago by cyanobacteria, quite soon after first life had emerged on Earth. As more and more microorganisms photosynthesized, oxygen (O2) – which is a byproduct of photosynthesis – was emitted into Earth’s atmosphere in increasing quantities. During the Archean Eon (4.0 – 2.5 Ga) the produced oxygen could be removed from the atmosphere by the oxydization of reducing minerals, most notably iron, and so life already altered the chemistry of the planet’s surface at this very early stage of its evolutionary history. In the beginning of the Proterozoic Eon (2.5 Ga – 541 Ma) however, when reducing materials were not available anymore in sufficient quantities, oxygen contents in the Earth’s atmosphere skyrocketed, which had profound consequences on the Earth’s climate and on life on Earth. The new oxygen-rich atmosphere is called the Third Atmosphere of the Earth, and as life was responsible for it in Earth’s history, the presence of oxygen absorption lines in atmospheres of extrasolar planets could be a sign for extraterrestrial life.

Today's Saturn moon Enceladus which is completely covered by ice. According to the Snowball Earth hypothesis the Earth looked similar to Enceladus during the Huronian glaciation (2.4 – 2.1 Ga), which was caused by the Great Oxygenation Event. (© NASA, JPL, SSI, Gordan Ugarkovic / Wikimedia Commons / Public Domain)

About at the end of the Huronian glaciation 2.1 billion years ago the first eukaryotes evolved, which were living cells having a nucleus and organelles such as mitochondria, the latter being able to extract energy from oxygen molecules. Eukaryotes were much larger in size than the original prokaryote cells, which were bacteria and archaea. The first multicellular organisms emerged around 1.9 billion years ago. The oxygen content in Earth’s atmosphere again rose significantly since around 850 million years ago, around the time of another glaciation event which is known as the Cryogenian Period (850-635 million years ago). Since a few hundreds of million years the oxygen content in the Earth’s atmosphere is relatively stable at around 20 percent.