Summary An abundance of multicellular macroscopic life was present on Earth since the Cambrian Explosion 541 million years ago. Extensive forests covered the continents during the Carboniferous Period (359-259 Ma) and were responsible for the buildup of a large part of today’s coal deposits. From fish amphibians evolved, which descended the land about 360 million years ago, and the land invasion of vertebrates was then further aided by the amniotic egg.

Keywords Big Life; Evolution of Life; Invasion of the Land

While the bacterial and the archaean cells solely exist as microorganisms, the innately larger eukaryotic cells can team up to form complex multicellular organisms. The first multicellular organisms already emerged around 1.9 billion years ago – soon after the Great Oxygenation Event –, however it took a long time until life reached the next step on the evolutionary ladder and shaped skeletons to support its increasingly complex and heavy bodies, which can now be excavated and studied by paleontologists. While in the Ediacaran Period (635-541 Ma) many soft-bodied multicellular organisms evolved, it was the Cambrian Explosion during which skeletons were first formed, and which marks the beginning of both the Phanerozoic Eon (541 Ma – today) and the Paleozoic Era (541-252 Ma). From the Cambrian Explosion onwards a multitude of fossils can be found.

The eukaryotes are divided into several kingdoms, for example the animals, the plants and the fungi. Biological taxonomy then further classifies life forms on the levels of phylum, class, order, family, genus and species. During the Cambrian Explosion most animal phyla appeared, with two examples for this being the chordates and the arthropods. The chordates include the subphyla of vertebrates (being defined by the presence of backbones) which includes today’s fish, amphibians, reptiles, birds and mammals; and the arthropods, which are invertebrate animals having an exoskeleton, include the classes of insects and of arachnids.

During the Silurian Period (443-419 Ma) fish evolved in the oceans, and – while the majority of life was still marine – arachnids, fungi and vascular plants gradually colonized the land. During the Devonian Period (419-359 Ma) fish types diversified greatly and amphibians emerged from lobe-finned fish. Amphibians were tetrapods – four-limbed vertebrates –, spent part of their lives under water, had a glandular skin and no scales, mostly laid eggs in water, and gradually descended the land at the end of the Devonian Period. During the Carboniferous Period (359-299 Ma) the continents were covered by tropical swamps and extensive forests. As bacteria and fungi could not consume the wood of trees yet, much of today’s coal deposits stem from dead wood of that era. Many of the forests of that period vanished in the Carboniferous rainforest collapse 305 million years ago, which was possibly caused by a global cooling. Another development of the Carboniferous Period is the development of the amniotic egg which allowed amphibians to colonize the land further inward, as they were not forced to return to water to give birth to their offsprings. Two amniote groups which appeared in the late Carboniferous Period were the synapsids and the sauropsids. Oxygen levels were higher than today – about 35% compared to today’s 21% –, which allowed insects and amphibians to grow to large sizes. 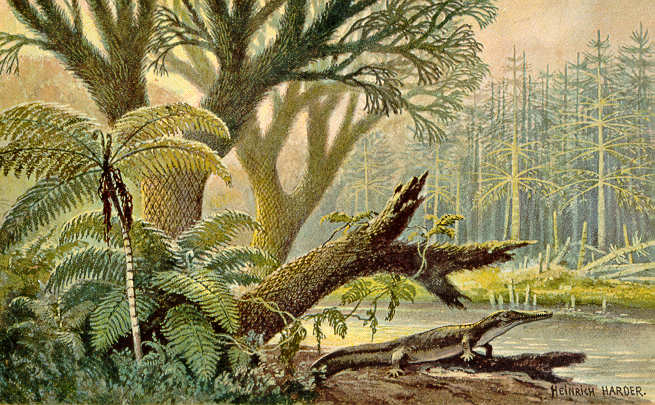 During the Permian Period (299-252 Ma) the Earth’s continents were unified in the supercontinent Pangaea. Synapsids such as the carnivorous Dimetrodon, which had a large neural spine sail on its back, constituted the first megafauna of terrestrial vertebrates. About 70% of terrestrial vertebrate species and 96% of marine species became extinct during the Permian-Triassic extinction event (the Great Dying), which was possibly caused by massive volcanic eruptions at the site of the Siberian Traps, which was the most deadly known extinction event in Earth’s history, and which such paved the path for the successive Age of Reptiles.