Summary The first few hundreds of millions of years of Earth’s history are called the Hadean Eon, named after the hellish conditions which prevailed on Earth. The Moon was formed by debris resulting from a collision of the Earth with a Mars-sized body 4.5 billion years ago. During the Hadean Eon asteroid impacts and volcanic eruptions were frequent and intense, and the Earth’s surface was furthermore heated by radioactivity and the greenhouse effect. 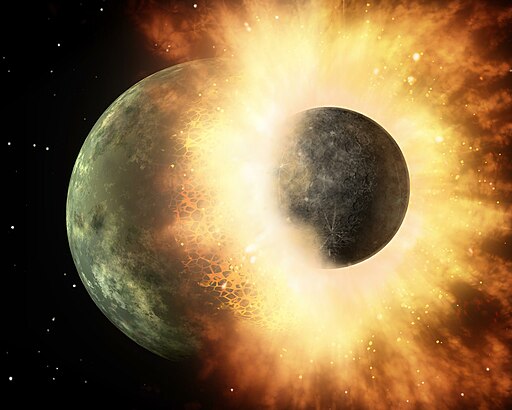 The collision of the Earth with the Mars-sized planetesimal Theia, which happened 4.5 billion years ago and led to the formation of the Moon, could have looked similar to this artist’s impression of the collision of two planetary bodies. (© NASA/JPL-Caltech / Wikimedia Commons / Public Domain)

Our planet Earth was formed 4.6 billion years ago, together with the Sun as well as the other planets of our Solar System, such as Mars and Venus. It is a terrestrial planet and was essentially formed by the coalescence of rocks – which in turn were chemical compounds consisting of heavy elements created by stars. The geologic time scale divides the history of the Earth in four eons, the first of which is the Hadean Eon. It lasted until 4.0 billion years ago and is named after the ancient Greek god of the underworld Hades, as hellish conditions prevailed on Earth during this time period.

At the beginning of the Hadean Eon, 4.5 billion years ago, a Mars-sized planetesimal named Theia collided with Earth. This giant impact led to the ejection of huge parts of the Earth’s mantle into space, where they coalesced and ultimately formed the Moon, which is the Earth’s closest cosmic companion since that time. This impact was so energetic that it created a hot atmosphere consisting of vaporized rocks on Earth for a short time. While in the beginning the Moon was closer to Earth and rotated at a faster rate than today, as well as did Earth, due to tidal interactions between the Earth and the Moon the Moon now always faces the same side to the Earth, and Earth days are continuously lengthening – for example, an Earth day only lasted about 21 hours at the beginning of the Phanerozoic Eon 541 million years ago.

An artist’s impression of Earth in the Hadean Eon. While the Sun shined relatively weakly, the Earth was heated considerably by asteroid impacts, radioactivity and greenhouse gases. Apart from that volcanic eruptions were rampant. (© Tim Bertelink (User:Triangulum) / Wikimedia Commons / CC-BY-SA-4.0)

During the Hadean Eon the Earth’s surface was hot – possibly at a temperature of about 200 °C –, even though the Sun shined weaker than today, a circumstance which is called the faint young Sun paradox. This is explained by strong heat sources in that time which are not as abundant today: First, there was still much heat around as Earth had just previously formed by the coalescence of several chunks of rocks, and asteroid impacts on Earth continued further. Second, large amounts of heat were released by the decay of radioactive elements which had been created during the explosion of a massive dying star short before the formation of our Solar System. And third, a strong greenhouse effect was caused by a dense atmosphere with a high content of carbon dioxide. This so-called Second Atmosphere of the Earth was created by outgassing from massive and frequent volcanic eruptions and from asteroid impacts, while the First Atmosphere of the Earth –which had primarily consisted of the light element hydrogen – got lost due to the relatively weak gravitational attraction of Earth. The high temperature on Earth’s surface impeded the formation of continents, and barely rocks were found from that time period. However, it seems that liquid water oceans were present at that time. The frequency of asteroid impacts ceased over time, but again increased during the so-called Late Heavy Bombardment from 4.1 to 3.8 billion years ago.