Summary The Holy Roman Empire rose out of the ashes of the Migration Period when Frankish king Charlemagne was crowned emperor by the pope Leo III, the head of western Christendom, in 800. The empire ceased to exist due to succession conflicts and was newly founded by German king Otto the Great in 962. While being rural in nature, it was an important power in central Europe over many centuries and was finally abolished during the Napoleonic Wars in 1806. 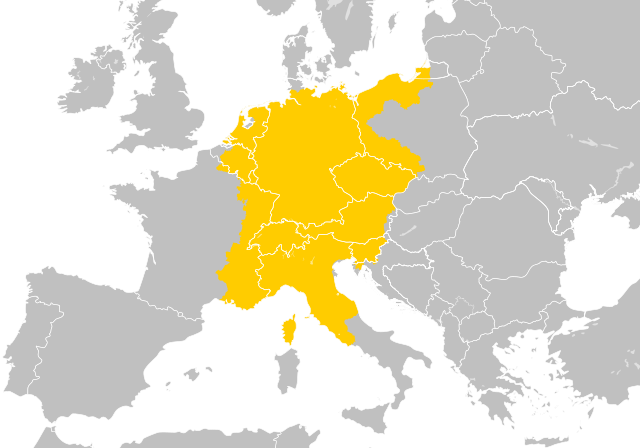 The Holy Roman Empire at the time of its maximum extent in the 13th century, superimposed on current state borders in Europe. (© User: Ernio48, User:Alphathon / Wikimedia Commons / CC-BY-SA-4.0)

After the Western Roman Empire collapsed in 476, western Europe sunk into the Dark Ages of the Migration Period. Germanic tribes conquered the remains of the formerly splendid empire, and cities were abandoned and literacy declined. Christianity, however, survived the fall of the empire and gradually spread among the Germanic tribes. One important step was the conversion of Frankish king Clovis I (r. 481-511), who reigned over the newly founded Frankish kingdom in western Europe, to Roman Catholicism in 496. Backed by the Kingdom of the Franks and the Bishop of Rome, whose successors were seclusively called Popes since the 11th century, Christian missionaries spread out to proselytize other tribes, such as “Apostle of the English” Augustine of Canterbury in the 6th century and “Apostle of the Germans” Saint Boniface in the 8th century. Over the centuries Christianity rose in Europe, similarly to Islam between the Iberian Peninsula and the Indus Valley and Buddhism in East Asia. The alliance between the Frankish kings and the popes was strengthened when Pope Leo III crowned Frankish king Charlemagne (r. 774-814) emperor of the re-founded Roman Empire in 800. Charlemagne expanded the empire from the French heartland to central Italy, northern Spain and Germany. After his death, however, the empire temporarily ceased to exist as it was split into West Francia (843-987), which evolved into the Kingdom of France (987-1792), and into East Francia (843-962).

East Francia was centered in today’s Germany in Central Europe. Saxon king Otto the Great (r. 936-973) defeated the Magyars, nomadic ancestors of the Hungarians who had terrorized central Europe for about a century, during the Battle of Lechfeld in 955, and was crowned emperor of the again re-founded Roman Empire in 962, which now had a German instead of a French heartland. This state was called the Holy Roman Empire since around the 13th century, as it included the papacy. Also other Christian states formed in Europe around that time, such as the Kingdom of England in 927, the Kingdom of Poland in 1025 and the Kingdom of Bohemia in 1198. European Christian identity as well as the conception of knighthood were influenced by the Crusades in the Holy Land (1095-1291), the homeland of Jesus, which ultimately were fended off by the Muslims. The Holy Roman Empire was rural in nature and it was by no means as powerful or technologically advanced as the ancient Roman Empire, or as the contemporary Byzantine Empire, the Abbasid Caliphate or even Tang China. While the city of Rome in its heyday had a million inhabitants, its population dropped to a few tens of thousands during the entire Middle Ages. The first city in the Holy Roman Empire which ever reached 100,000 inhabitants was Prague around 1600.

In the 15th century the techniques of printing and gunpowder reached Europe from China via the Mongols. Protestant Christianity spread since the 16th century, with one leading figure of the opposition against Roman Catholicism being Martin Luther, which led to the Thirty Years’ War (1618-1648) between Catholics, Protestants and other powers. In the early modern period the Holy Roman Empire came under increased pressure from the expanding Ottoman Empire. The House of Habsburg influenced its history as well as the history of Europe in many ways: It ruled Austria as dukes since 1278 and the Holy Roman Empire continuously as emperors from 1440 to 1740. Additionally, they were the kings of Bohemia, Hungary and Croatia in 1526-1918. Another line of that family, the Spanish Habsburgs, ruled over the Spanish Empire in 1516-1700. On the other hand over time the emperors lost more and more power to local rulers. In the 18th century French philosopher Voltaire ironically said that “the Holy Roman Empire was in no way holy, nor Roman, nor an empire”. It was ultimately abolished during the Napoleonic Wars in 1806. The Habsburgs retreated to become the emperors of the Austrian Empire (1804-1867) and of the Austro-Hungarian Empire (1867-1918), while the heartland of the empire was unified in 1871 under Prussian leadership in the German Empire (1871-1918). Both the Austro-Hungarian Empire as well as the German Empire ultimately ceased to exist when they lost in World War I (1914-1918).