Summary From the conquest of Mecca in 630 onwards, the region between the Iberian Peninsula and the Indus Valley was shattered by a series of Arabic conquests, under the religious banner of Islam which had been founded by prophet Muhammad. The Islamic Golden Age from the 8th to the 13th century under the Abbasid caliphs in Baghdad followed, as science and society flourished. The Abbasid central political power ceased since the 10th century as Iranians and Turks advanced, and it was ultimately ended with the Mongol conquest in the 13th century. 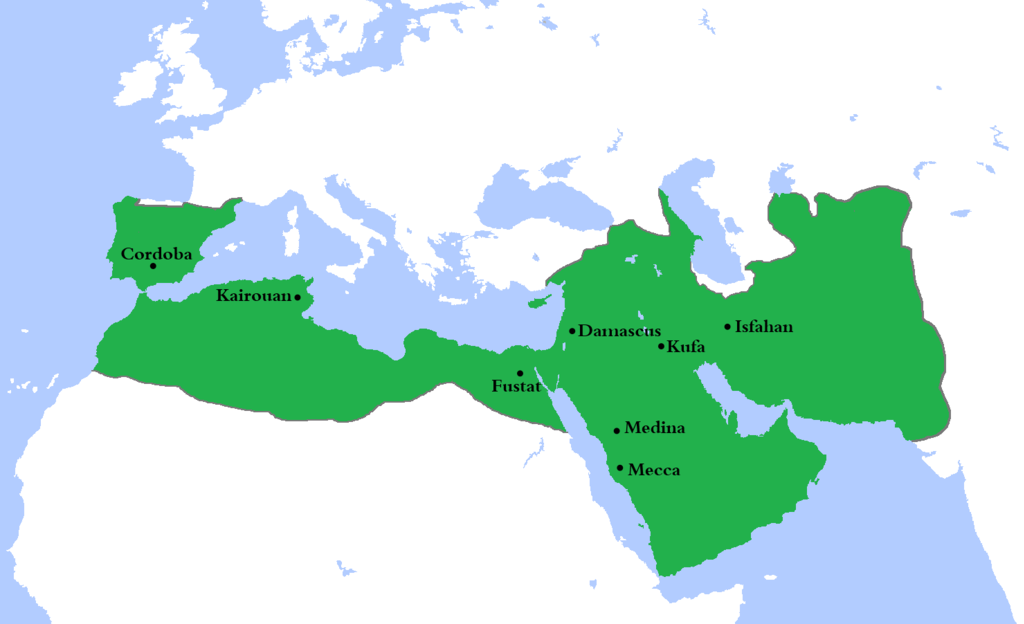 Geographical extent of the Umayyad Caliphate in 750. Islamic rule extended from the Iberian Peninsula and Morocco in the west to the Indus Valley in the east. (© User:Gabagool / Wikimedia Commons / CC-BY-3.0)

Similarly to the rise of Buddhism in East Asia’s Tang China and of Christianity in Europe’s Roman Empire and Holy Roman Empire, in the 7th and 8th centuries Islam spread rapidly in the lands between the Iberian Peninsula and the Indus Valley. Islamic prophet Muhammad (about 570-632) was expelled from the Arabic city Mecca to Medina in 622 and conquered it together with his followers in 630. After his death the Arabs then conquered Syria and Egypt from the Byzantine Empire until 642. The Sasanian Empire (224-651) in Iran, being weakened from recent wars with the Byzantine Empire, was subsequently conquered. After the Arabs initially were led by the Rashidun Caliphs – a caliph being the righteous successor of prophet Muhammad –, Muawiyah I (r. 661-680) founded the Umayyad Caliphate (661-750) which was mostly ruled from its capital Damascus in Syria. Around that time the adherents of Shia Islam, who did not accept the Umayyad caliphs and are nowadays dominating in Iran, split from Sunni Islam, which dominates in most other Muslim countries. In 698 Carthage in Tunisia was conquered, and in 711 the Visigothic Kingdom on the Iberian Peninsula was defeated and Sindh in the Indus Valley (now southern Pakistan) was conquered. The conquest of Christian Francia under Charles Martel, on the other hand, was prevented by the lost Battle of Tours in 732.

The House of Wisdom in Baghdad. It was a center of science and learning from the 8th to the 13th centuries and a symbol for the Islamic Golden Age. (© Unknown / Wikimedia Commons / Public Domain)

Then the Abbasid Caliphate (750-1258) was established, while the former rulers retreated to the Iberian Peninsula to form the Umayyad Emirate of Córdoba (756-929) and then the Caliphate of Córdoba (929-1031). In 751 the Abbasids fought victorously against Tang China in Central Asia, after which paper-making technology probably spread from the east to the Muslim world and later to Europe. The Abbasid caliphate reached its greatest extent around 850. The Abbasid capital was the city of Baghdad in Mesopotamia (today’s Iraq), founded in 762, which had up to about one million inhabitants and was the largest city in the world in about 800-950. Especially in the late 8th and in the 9th centuries culture and science fluorished in the House of Wisdom in Baghdad, which was a symbol of the Islamic Golden Age. Old Greek philosophical and scientific texts were translated into Arabic. Famous personalities of that age were Persian mathematician and astronomer Muhammad ibn al-Khwarizmi (about 780-850), Arab mathematician Ibn al-Haytham (Alhazen, about 965-1040) and Iranian polymath Al-Biruni (973-1050). The Hindu-Arabic numeral system, being the positional decimal numeral system with a zero which is nowadays usually used, was invented in India during the first few centuries CE and then adopted by Arab mathematicians in the 9th century, before it became widespread in Europe in the 15th century and later in the whole world.

The political Abbasid power largely ended with the capture of Baghdad by the Iranian Buyids in 945 and by the Seljuq Turks in 1055. Abbasid leadership became largely ceremonial and religious, while Iranian and Turkish rulers possessed the actual power. The Islamic Golden Age as well as central Abbasid rule finally ended with the invasion of the Mongols who captured Baghdad in 1258. The Abbasids then claimed religious leadership in Mamluk Egypt in Cairo (1261-1517), until the dawn of the Turkish Ottoman Caliphate (1517-1924). While the Muslim world fragmented politically, Islam itself continued to be the dominant religion from Morocco to Pakistan. Also Central Asia became Islamic under its Mongol rulers. In India large Muslim empires were erected since the 13th century, such as the Mughal Empire (1526-1857), and from the Indian subcontinent Islam spread further east to as distant lands as Malaysia and Indonesia.