Summary India came unter the control of the Mughal Empire, founded by central Asians, in the early 16th century. Islam, the religion of the imperial elite, and Hinduism, the religion of the majority of the populace, could be reconciled during most of the 16th century, but later came into increasing conflict with each other. Mughal rule was weakened by rebellious Hindu kingdoms in the beginning of the 18th century, and it was finally abolished by the British Empire in 1857.

Mughal emperor Akbar the Great (r. 1556-1605) holds a religious assembly. He created the syncretic religion Din-i Ilahi with the aim to reconcile his Muslim and Hinduist subjects. (© Painted by Nar Singh around 1605 / Wikimedia Commons / Public Domain)

After Islam had been founded on the Arabian Peninsula in the early 7th century by prophet Muhammad, the Islamic conquests reached India when Sindh, being located around the Indus River Delta in today’s southern Pakistan, was conquered in 711 by Muhammad bin Qasim. A few centuries later Muslim sultan Mahmud of Gazni (998-1030) raided northern India for several times, taking the traditional route of invaders of India through the Khyber Pass from Afghanistan. Muhammad of Ghor (r. 1173-1206) then laid the foundation of extended Muslim rule in India. After getting control over the Punjab, he advanced along the Ganges as far to the east as Bengal. Around 1200 the famous Buddhist Nalanda monastery in Bihar was destroyed by Muslim invaders. Muhammad of Ghor’s former general Qutb al-Din Aibak then founded the Delhi Sultanate (1206-1526), which is named after its capital in northwest India and was successively ruled by five dynasties. During this time the Hindi-Urdu language emerged. The Delhi Sultanate encompassed nearly whole India in the beginning of the 14th century under the Turko-Indian Tughluq dynasty (1320-1413), which was the first time that large parts of India were unified in a single state since the Maurya Empire had collapsed about 1500 years before.

The Delhi Sultanate was then superseded by the Mughal Empire (1526-1857), which was also erected by Muslim rulers who originated from Central Asia. It was founded by Babur as a result of the First Battle of Panipat in 1526, during which gunpowder weapons passed on by the Mongols from the Chinese were for the first time used on the Indian subcontinent. Babur was a direct descendant of Timur who had ruled over Iran and neighboring countries around 1400, and Mughal is the Arabic and Persian expression for Mongol. After a brief interruption, the newly formed empire was consolidated under the rule of Akbar the Great (r. 1556-1605). He tried to promote the syncretic religion Din-i Ilahi, which combined elements of Islam, Hinduism and other religions, in order to reconcile his subjects, the majority of which were Hindus. 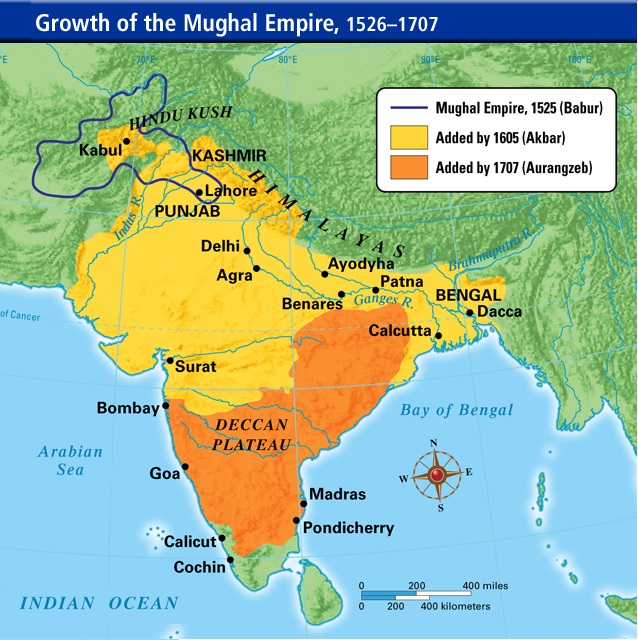 The Mughal Empire in 1707. Under Mughal rule the Indian subcontinent was for the third time in history politically nearly unified, following the Delhi Sultanate in the 14th century and the Maurya Empire from the 4th to the 2nd centuries BCE. (© User:Santosh.mbahrm / Wikimedia Commons / CC-BY-SA-3.0)

In the 17th century Mughal India had more than 100 million inhabitants, which constituted about 20% of the world population, and it was the world’s largest economic and manufacturing power. Mughal emperor Shah Jahan (r. 1628-1658) shifted the capital from Agra to Delhi (the 1639 founded Shahjahanabad which is the current Old Delhi), and he constructed the mausoleum Taj Mahal for his deceased favorite wife Mumtaz Mahal. Emperor Aurangzeb (r. 1658-1707) added large parts of south India to the empire which became even larger than the former Delhi Sultanate at its peak, however his hard-line policy also created increasing tensions between the Muslim ruling class and the Hindu majority. Soon after Aurangzeb’s death the Mughal Empire declined, partially due to the advancing Hindu Maratha Empire (1674-1818) from western and south India. Also the British East India Company was expanding in India at that time. The merely ceremonial Mughal Empire was ultimately abolished by the British Empire after the Indian Rebellion of 1857, and the British Raj was established.