Summary In the 13th century the vast region between China, eastern Europe and southwest Asia was conquered by the Mongols, who were nomadic horsemen and initially led by Genghis Khan, by brutal methods. They ruled over Iran until 1335, over China until 1368 and over Russia until 1480. Their rule over large parts of the Eurasian continent led to the accelerated spread of technologies and to intensified trade between East and West. 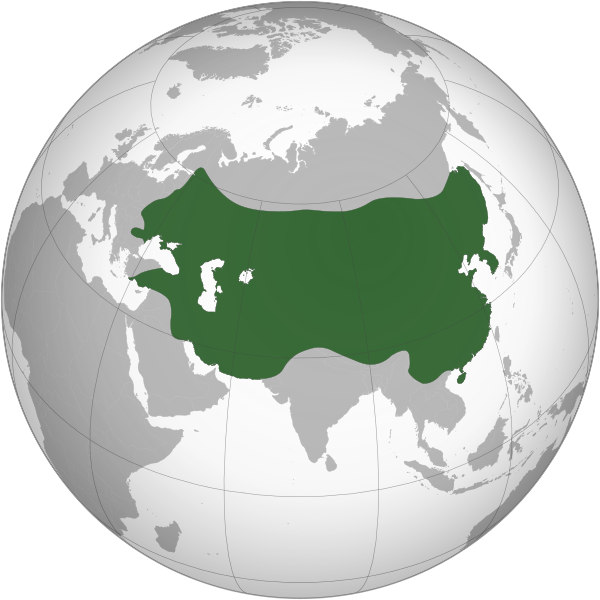 The Mongol Empire at the time of its greatest extent in 1279. It stretched from China in the east to Belarus and Ukraine in the west and to Iran in the south, and it was the largest contiguous empire in world history if measured by controlled land area. (© User:Ali Zifan / Wikimedia Commons / CC-BY-SA-4.0)

The Mongol conquests in the 13th century shattered Eurasia. The Mongols were nomadic horsemen which originated from the lands north of the Great Wall of China, they mastered shrewd war tactics and were known for their brutality. The Mongol Empire was the largest contiguous empire in world history if measured by controlled land area. After Genghis Khan (r. 1206-1227) unified the Mongol tribes in 1206 and became the first Khagan – or Great Khan – of the Mongol Empire, he conquered parts of northern China, and overthrew the Khwarazmian Empire in Iran and Central Asia in 1221. In 1220 the Mongol capital Karakorum was founded.

After Genghis Khan’s death the Mongols turned their attention to Europe: The military leader Batu Khan, founder of the Golden Horde, conquered the Kievan Rus’ in 1236-1242. The Mongol hordes decisively won the Battle of Legnica in Poland and the Battle of Mohi in Hungary in 1241. They raided through Bulgaria, Czech, Austria and Croatia, and they reached the Adriatic Sea. Europe and especially the Holy Roman Empire were only saved from more devastating Mongol invasions due to the death of Khagan Ögedei Khan (r. 1229-1241), which let the Mongol leaders withdraw to Central Asia to elect a new Khagan. In 1256 the Ilkhanate was established in Iran, and in 1258 Baghdad was conquered and the Abbasid Caliphate was formally abolished. In 1279 the Song dynasty of China was overthrown and replaced by the Mongol Yuan dynasty, which was established by Khagan Kublai Khan (r. 1260-1294). Such, the nomadic Mongols conquered the two technologically most advanced civilizations of its time in China and the Fertile Crescent. Overall the Mongols killed millions of people, severely devastated several cities such as Kiev, Baghdad, Merv, Samarkand and Beijing, and destroyed infrastructures such as irrigation systems which led to the death of even more millions of people. The Mongols attempted but failed to conquer Japan, Vietnam, India and Egypt.

Mongols besieging a city in the 13th century. The Mongols were known for their brutality. When Merv in the Khwarazmian Empire (in today’s Turkmenistan) was taken in 1221, an estimated number of several hundred thousands of inhabitants were slaughtered. (© Painting photographed by Bill Taroli / Wikimedia Commons / CC-BY-2.0)

The Mongols most probably brought the Black Death to Europe, a pandemic which rampaged there in the 14th century. They made it possible for a few technologies to travel from China to Europe, such as printing and gunpowder, and allowed travellers from the West to travel to China, in particular Marco Polo from Venice (Italy) in 1276-1291 and Ibn Battuta from Tangier (Morocco) in 1332-1347. The Ilkhanate between Turkey and Afghanistan was overthrown in 1335 and later replaced by the Timurid Empire (1370-1507), founded by Timur (r. 1370-1405) who is also known as Tamerlane. The Yuan dynasty of China was replaced by the Han-Chinese Ming dynasty (1368-1644), and the Golden Horde ruled over Russia until 1480.